The Myth of Old Man Echidna 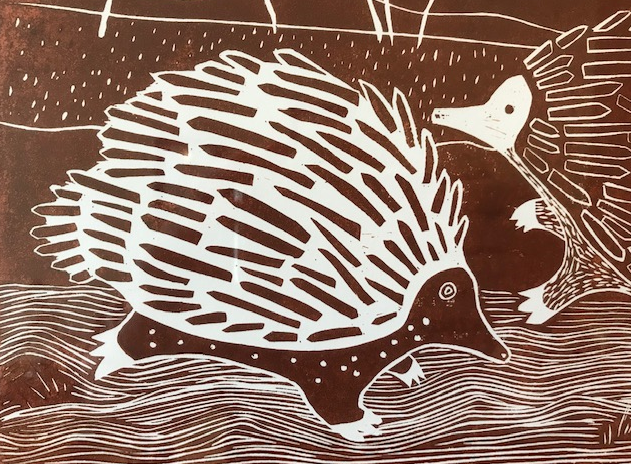 IN ABORIGINAL MYTH Echidna (vari-ously known as Tjirilya, Jula-wil, Libgwil or Gauang) was a very old man who lived apart from his people, seldom leaving the shelter of his gunyah (bark hut). He was too old to hunt and survived by luring young men to his camp and killing them for their flesh.

When this horrifying secret was revealed, the Aboriginal men sought out Echidna and, surrounding him, threw spears at him until they formed a bristling mass on his back. Then they broke his arms and legs, leaving them distorted and twisted. Badly hurt, Echidna crawled into a hollow log and stayed there until his wounds healed.

When he finally emerged, his hands and feet were changed into strong, useful claws that could be used for digging and his arms and legs, though terribly bent, were still able to carry him. But neither he nor his wife Nunkito were able to pull the spears from his body.

When you come across Echidna in the bush today, he buries himself immediately to get out of your sight, for he still remembers the humiliating punishment he received for his canni-balistic crime. Other Aboriginal myths tell of the echidna’s strength, saying it can lift huge flat stones in order to hide under them.

It is said to be a good fighter, too, but zoologist Mike Augee maintains it is one of the most docile creatures in the bush. Another myth, that the echidna is fond of honey, is also not supported by fact. Elders of the Aranda tribe in central Australia say that eating echidna when you are young makes you white-haired.

I loved this story about old man Echidna. I did not write it….I found it here: